The ability of Zr-based MOFs to withstand the presence of large amounts of defects, while retaining most of their “trademark” stability, is promoting the development of new approaches to fine tune their physical-chemical properties through defect engineering [1]. Of particular interest is the possibility to easily introduce a vast range of functionalised monocarboxylates as compensating groups at missing-cluster defective sites, either by post-synthetic exchange [2] [3] or by modulated synthesis [4]. This, in principle, affords access to a much larger chemical space than the classical method involving incorporation of modified linkers in the framework.

Drawing inspiration from the classical approach of using 2-aminoterephthalic acid as a linker to reduce the band gap of UiO-66, we have recently developed a strategy to tune the photochemical properties of the prototypical Zr-based MOF UiO-66 by post-synthetic introduction of amino functionalised benzoic acids (ABAs) at defective sites. The resulting defect-engineered MOFs display systematically smaller band gap than the pristine material, where defects are compensated by formic acid. The influence of the position and number of amino functional groups on the electronic structure of the framework was also investigated with the aid of density functional theory calculations, showing that introduction of ABAs shrinks the band gap by shifting the valence band to higher energy, in a similar fashion to what observed when 2-aminoterephthalic acid is introduced in the framework as a linker. Photochemical activity was probed by dye degradation tests in water and photocatalytic CO2 reduction, showing improved performance for the defect-engineered materials. This work provides proof of concept that a simple defect engineering strategy, involving inexpensive and commercially available reagents, can be employed to systematically tune the photochemical properties of UiO-66 and is a powerful and versatile alternative to classical linker modification. 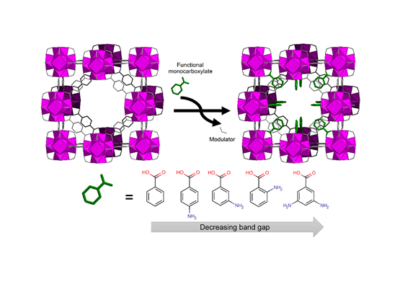