Carborane clusters have become an important class of molecules for self-assemblies. Their rigid molecular structures and rich isomeric forms enable to investigate particular physical properties of their 2-D assemblies while keeping the surface pattern either identical or very similar. The respective self-organized monolayers exhibit fewer types and lower total number of surface defects, partly as a consequence of their low conformational freedom. In our laboratories we have been using these molecules as basic constituents for better understanding of some most fundamental self-assembly principles and intermolecular interactions that lead to a certain supramolecular structure and function. Recently we shed more light on several key aspects such as the interaction of these molecules with flat gold surfaces, we analyzed and showed the effect of their dipole moment orientation and magnitude on the surface potential changes and, not the least, we opened these monolayers to further chemistries by introducing additional functional groups that are in their SAMs exposed from the surface. This talk will summarize several of these aspects but will also show how these isomeric species can be used to generate new metal clusters with interesting photo-physical properties and advantageously used to understand their interaction with light. 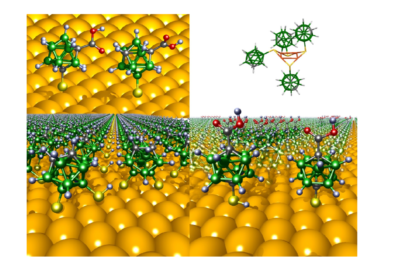